Breastfeeding, an article by Pilar Manazanaro 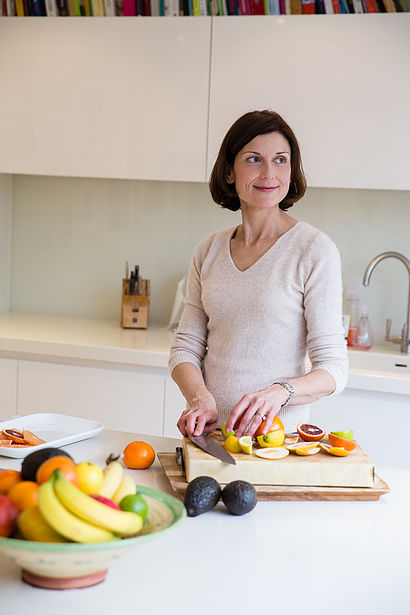 As a first time mother and enthusiastic cook, Pilar became interested in the nutritional properties of individual foods and started researching the impact diet can have on long-term health. Right after her second child was born, Pilar started a degree in Nutritional Therapy and by the time her third child arrived, she was qualified and ready to start her clinic!

As a Nutritional Therapist, Pilar is particularly interested on how diet and nutrition can help balance women’s health and have a positive impact on child development from pre-conception to the teen-years.

The World Health Organisation (WHO) recommends that babies are exclusively breastfed to the age of 6 months and ideally until two years of age once solids have been introduced. This article outlines why breast milk is the ideal food for infants and how the nursing mother’s diet can impact not only her baby’s development and her own health too.

Let’s start at the very beginning, colostrum a yellowish creamy substance is produced by the breasts for the first 2 to 3 days after birth. The role of colostrum is not to provide energy but to protect new-born babies from infection and disease as it contains immune cells and antibodies from the mother.

Breastfeeding has been associated with a reduced risk of overweight and obesity in later life which can only be a good thing considering that obesity has been linked to diabetes, hypertension and cardiovascular disease. Breastfeeding also helps protect from the development of allergies.

However, breastfeeding is not always possible or sufficient to satisfy baby’s hunger. In these cases, the only alternative is infant formula as cow’s, goats or non-dairy milks are not suitable at this early age because they may cause blood loss in the immature gut increasing the risk of anaemia. Exposing baby’s immature gut to dairy products may increase the risk of developing a dairy allergy and type 1 diabetes in infants with a genetic predisposition.

Most baby formulas contain pre-biotics, the fibre compounds that feed good bacteria in the baby’s gut and thus help the gut mature, as well as essential fatty acids which contribute to brain, ear and eye development. When choosing an infant formula, it is advisable to avoid those containing sugar (*) whenever possible as early sugar consumption in childhood has been linked to an increased risk of obesity in childhood. Obesity in childhood is a health risk because it tends to persist in adult life and has been identified as a contributing factor to diabetes, cardiovascular disease and metabolic syndrome.

Breastfeeding not also supports the baby’s health but also has important benefits for the mother:

Breastfeeding can help regain pre-pregnancy weight as during the first 6 months a baby needs and average of 750ml of milk which will require about 500Kcal to produce, of which approx. 150Kcal come from fat reserves.

Breastfeeding has been associated with lower risk of breast, ovarian and endometrial cancer possibly due to the lower levels of oestrogen produced while breastfeeding and possibly the healthier lifestyle women tend to lead while nursing their offspring.

Nutrient reserves can be low after pregnancy and blood loss during birth. Reserves may be further depleted by the increased nutrient demand during lactation as Mother Nature puts baby’s needs first.

Nursing mothers need 3-4 portions of protein a day to ensure breast milk contains a sufficient amount  which is important to help baby’s gut absorb nutrients such as calcium and phosphorus as well as to support the infant’s developing immune system.

Omega-3 fats are essential for humans, i.e. cannot be synthesised by the body and need to come from the diet, and are necessary for brain and eye development. Having 2 portions of oily fish a week should cover the needs of lactating mothers, although it is recommended to limit sword fish and tuna to a maximum of once a week as they may contain high amounts of mercury and may harm baby’s developing nervous system.

Staying hydrated is important as breast milk is 90% water. The NHS recommends drinking plenty of fluids including water, milk and herbal teas and drinking caffeine and alcohol occasionally and in modest amounts as both find their way into breast milk and may affect baby.

Omega-3 fats are essential for humans, i.e. cannot be synthesised by the body and need to come from the diet, and are necessary for brain and eye development. Having 2 portions of oily fish a week should cover the needs of lactating mothers, although it is recommended to limit sword fish and tuna to a maximum of once a week as they may contain high amounts of mercury and may harm baby’s developing nervous system.

Staying hydrated is important as breast milk is 90% water. The NHS recommends drinking plenty of fluids including water, milk and herbal teas and drinking caffeine and alcohol occasionally and in modest amounts as both find their way into breast milk and may affect baby.

Micronutrients: vitamins and minerals in lactation

Vitamin A is necessary for baby’s eye health as well as growth. Normal amounts in the mother’s diet are sufficient to ensure breast milk contains adequate levels. Sources of vitamin A include meat, especially liver, eggs and dairy. Beta-Carotene is found in brightly coloured vegetables such as pumpkin, carrots, peppers and spinach and can be transformed by the human body into vitamin A.

Vitamin D deficiency in pregnancy and lactation is frequent, especially when exposure to sunlight is limited. The NHS recommends that breastfeeding women take a daily supplement of 10 mcg of vitamin D, to ensure the mother’s and baby’s requirements are covered

Vitamin B12 is found in animal products so vegetarian and vegan mothers are at risk of deficiency and their breast milk may not contain enough of this nutrient which is fundamental for neurological development. A B12 supplement may be recommended in these cases.

Calcium stores may be reduced during lactation as it is released from the bones to meet the baby’s needs. Mother’s bone mass density, however, recovers after breastfeeding as calcium absorption from the diet is increased. Calcium rich foods include dairy products, fortified dairy-free alternatives, broccoli, sesame seeds and almonds.

Iodine in breast milk is essential to build baby’s thyroid hormone stores and to prevent neurological damage.  Iodine can be found in seaweed, fish, shellfish and dairy products and pregnant women are advised to increase their intake to 250mcg/day which approximately amounts to a glass of milk, a yogurt, 2 eggs and a piece of fish.

Maternal iron stores may be depleted during pregnancy as baby’s stores are built and due to blood loss during delivery. Exclusive breastfeeding is normally associated with amenorrhea (absence of periods) and therefore helps prevent anaemia. Breast milk is a poor source of iron so baby’s build up stores in the womb to last approximately 6 months after which they need additional sources of this nutrient.

Zinc in breast milk is highly bioavailable and necessary for growth and immunity. Good dietary sources of zinc are: shellfish, meat and dairy and to a lesser extent cereals.

Breastfeeding is best for baby but we must not forget that the mother’s nutritional status impacts her baby’s and her own health. A balanced and varied diet rich in vitamin A, B vitamins, calcium, zinc, iodine and iron can help prevent mother nutrient reserve depletion and infant malnutrition.

For a full version of this article including references, please email pilar@purplecarrotnutrition.co.uk