Win tickets to ‘I believe in unicorns’ by Michael Morpurgo – ENDED

I believe in unicorns by Michael Morpurgo

Answer a simple question for a chance to a win tickets to see the show. Competition ends, 9th August 2015 at 00.00.

Back by popular demand, for a second magical West End season, this intimate show is set in a library full of books that hold more than stories within their pages. It is a tale of the power of books, and the bravery of a young boy called Tomas. Tomas loves playing in the mountains where he lives and hates reading and school, but his world is turned upside down the day he meets the Unicorn Lady (Danyah Miller) in his local library…

An enchanting and interactive show, I Believe in Unicorns sparks the imagination of both young and old. We’re sure that you too will believe in unicorns after joining Tomas’s spellbinding journey!

Suitable for a family audience and children aged 6+

‘Danyah’s performance is a tour de force. the show is moving and memorable, a glorious example of the magic of storytelling. I didn’t like it, I loved it!’
– Michael Morpurgo

The Competition has now ended. 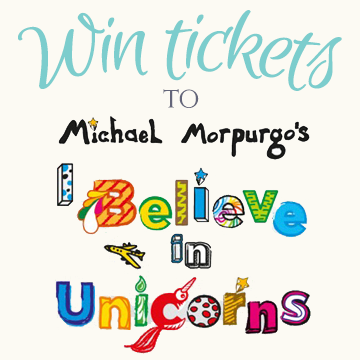