Unico Gelato & Caffe, the Italian delicatessen specialises in gelato, coffee and pastries. It is linked to one of the most famous Gelato shops in Bologna, Cremeria Funivia and uses the great Italian culinary traditions and historic recipes of its hometown to bring a true taste of Italian Gelato to London.

In addition to these, they also offer vegan options, including Strawberry sorbet, Lemon sorbet, and Dark Chocolate gelato. The gelato is made fresh on-site every day and is served in cones or cups, or there’s the option to take it away to eat at home in larger tubs. 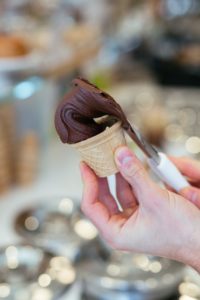 With the rise of dairy intolerant children, the value of their Vegan dark chocolate flavour is the simplicity of its recipe. They use just water, sugar, and extra dark chocolate powders. This recipe makes the flavor extremely simple, light and refreshing. However, they wouldn’t serve this vegan dark chocolate if it wasn’t as creamy and tasty as gelato must be – because of their craftsmanship, they are able to get a creamy texture.